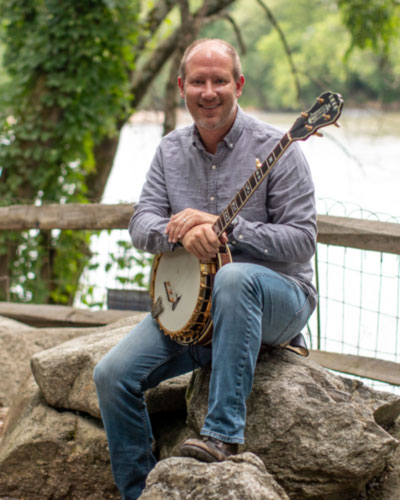 Michael Bont’s natural abilities in the visual and musical arts were realized early. As a student at Grand Haven High School, he excelled at art and even created a large-scale acrylic painting that won an award at Showcase. In his free time, he played in garage bands and developed his passion for music. During his junior year of high school, Michael saw a concert by Fugazi and realized his calling was to perform music.

Using a banjo he received for his twenty-first birthday, Michael taught himself to play by listening to Jerry Garcia, Earl Scruggs, and others. While attending Western Michigan University, he met like-minded musicians and formed Greensky Bluegrass, an acoustic bluegrass band.

Greensky Bluegrass developed a significant following, performing over 150 live shows each year and releasing eight albums since their formation in 2000. They have performed at national festivals and incredible venues, including the Red Rocks Amphitheater in Colorado. They have opened and accompanied prestigious artists, including Natalie MacMaster, Bruce Hornsby, and Earl Scruggs, whose albums provided Michaels’s first music lessons.